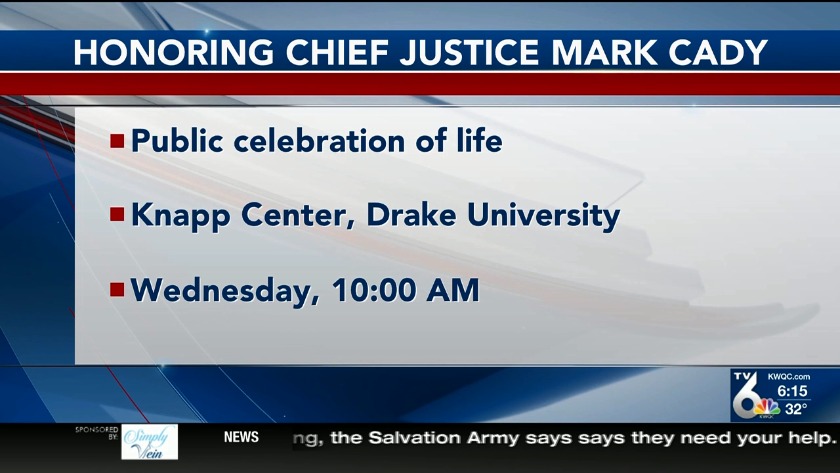 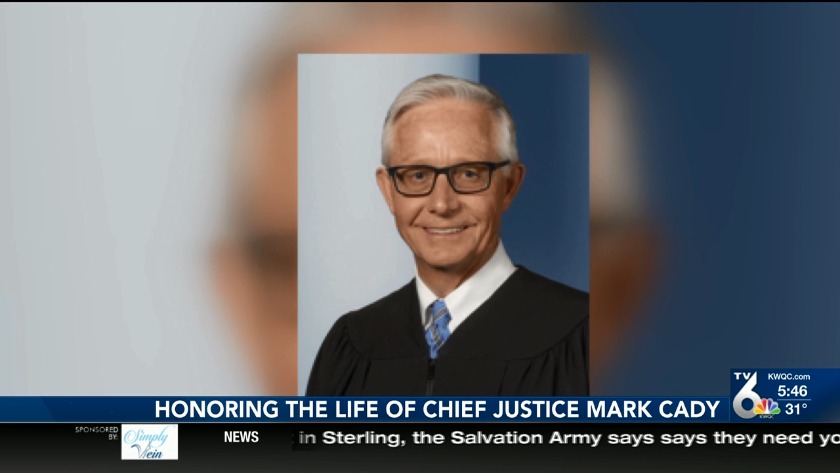 Iowa Governor Kim Reynolds has ordered all flags to fly at half-staff for November, 20th- when the public will pay their respects to Chief Justice Mark Cady.

Chief Justice Cady was born in Rapid City, South Dakota and earned both his undergraduate and a law degree from Drake University. He was appointed to the Iowa Supreme Court in 1999 and the court selected him as Chief Justice in 2011. During his time as a Justice, he played a big part in legalizing same-sex marriage and most recently, he wrote the 5-2 majority opinion in Planned Parenthood v Reynolds that struck down a 72-hour waiting period for an abortion. Chief Justice Cady was married with two children and four grandchildren.

America is more equal because of Chief Justice Mark Cady. His landmark decision brought marriage equality to Iowa and pushed our nation closer to our highest ideals. @DrBiden and I send our condolences to his loved ones. His integrity and commitment to justice will be missed. https://t.co/MVyY03Txak

The Iowa Supreme Court announced the first steps toward creating the Chief Justice Mark S. Cady Learning Center, which will be on the 1st floor of the Judicial Branch building. He was a longtime advocate for civics education, serving on the iCivics Board of Directors, traveling around the state to meet with Iowa students to discuss the role of the judicial branch of government, and welcoming civic groups to the Iowa Judicial Branch Building. He had a goal to create an interactive learning center for all of Iowa in the judicial branch building and now, it’s happening. The exhibit will show the process of a case through Iowa’s court system.

Chief Justice Cady’s term was set to expire in December of 2024. Going forward, his vacancy in the office will be filled for the remaining of his term by a majority vote of the Justices of the Supreme Court, after the empty seat has been filled.

The Iowa Supreme Court has announced there will be a celebration of life to honor Chief Justice Mark Cady, who passed away Friday.

The celebration is scheduled for this Wednesday, November 20th
in the Knapp Center on the Drake University campus, 2601 Forest Avenue, Des Moines, beginning at 10 a.m. Where they'll remember Chief Justice Cady and the contributions he made to the Iowa judicial branch and judicial independence.

In a statement from his family, they say he passed away unexpectedly Friday evening from a heart attack. Cady was appointed to the Iowa Supreme Court in 1998. He was selected as chief justice in 2011. His current term runs through 2024.

Statement from the family:
“Tonight(Friday), the state lost a great man, husband, father, grandfather, and jurist. Chief Justice Mark Cady passed away unexpectedly this evening from a heart attack. Arrangements are pending.”

Cady was born in Rapid City, South Dakota. He earned his undergraduate and law degrees at Drake University. He leaves behind a wife, two children, and four grandchildren.