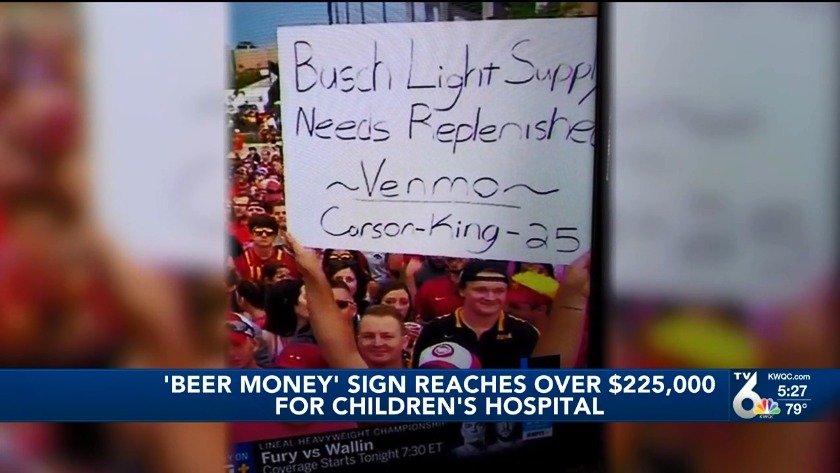 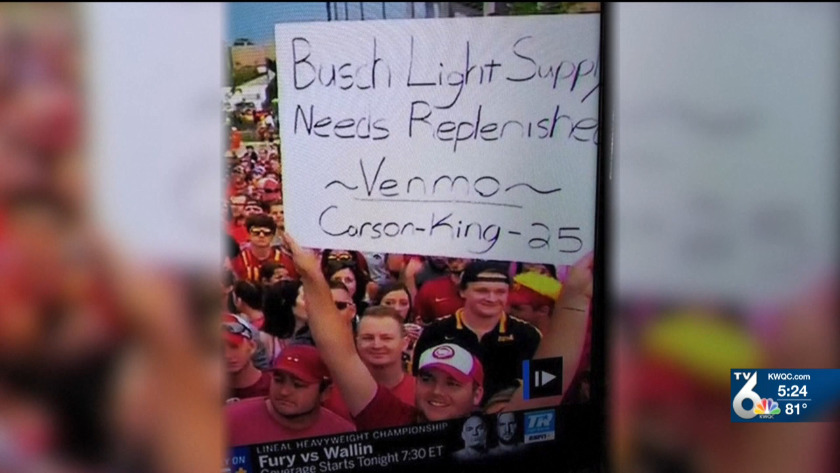 DES MOINES, Iowa (CNN/KCRG) - UPDATE 9/19: (CNN) An Iowa State fan who made a sign asking for people to send him money on Venmo for beer has now raised more than $225,000 for the University of Iowa Stead Family Children's Hospital.

23-year-old Carson King decided to donate the money as it started adding up.

His donations have reached more than $75,000, and since two companies, Busch Beer and Venmo, have pledged to match his total, the campaign has raised more than $225,000 total.

ORIGINAL: (KCRG) An Iowa State fan's tongue-in-cheek sign asking for more beer money has now raised tens of thousands of dollars for the University of Iowa Stead Family Children's Hospital after two companies said they would match his total.

According to Carson King's Twitter account, people have sent him over $10,000 in donations to his Venmo account after holding up a sign that said "Busch Light Supply Needs Replenished ~Venmo~ Carson-King-25" during the broadcast of ESPN's College GameDay ahead of the Iowa State versus Iowa football game on Saturday.

King, 23, said instead of using the money to buy more beer, he plans to donate all the money to the University of Iowa Stead Family Children's Hospital.

The first was Busch Beer, tweeting that it would match whatever King collects.

.@CarsonKing2 this is the best thing we have read all year, we’re inspired.

We’re going to match your donation to University of Iowa Hospitals & Clinics, and we’ll throw in some of that Busch Light you were looking for. https://t.co/NPPrPp6zJg

Now, the online money transfer service Venmo has added its matching donation to the total.

We see a lot of great stories, but this is one of our favs @CarsonKing2. Count us in for matching the donation to the hospital, too. #ftk��@BuschBeer @CollegeGameDay https://t.co/thS8JXOXC3

If you'd like to donate, his Venmo user name is @carson-king-25.

Read the original version at kcrg.com.