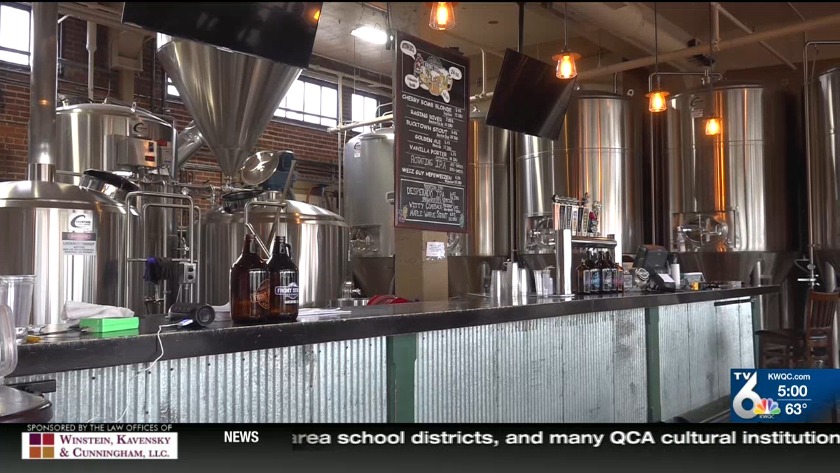 Iowa bars to reopen next Thursday

Iowa bars to reopen next Thursday

DAVENPORT, Iowa. (KWQC) - Iowa Governor Kim Reynolds announced on Wednesday that more businesses can begin to open in the next days. Those include movie theaters, zoos, aquariums, museums, and bars.

Bars like Front Street Brewery & Tap Room have been closed for months, having to reduce their hours and furlough about 10 employees because of stay-at-home regulations.

Bars like Front Street Brewery & Tap Room have been closed for months, having to reduce their hours and furlough about 10 employees because of stay-at-home regulations.

Pat Sherman, co-owner of Front Street Brewery says the past few weeks have been "incredibly slow" and they're all excited to get back to work. They'd normally be preparing for their busiest time of the year, "our biggest months are in the summertime. And we’ve had incredibly nice days when normally we’d have hundreds and hundreds of people and we're not even open."

Crawford Brew Works has also felt a loss over the last months. General Manager Debbie Davis explains, "it’s a little heartbreaking. We were supposed to be crazy busy with seven food trucks a week, music every weekend, events of different kinds. Our May looks much much different than what it was supposed to."

Since bars are some of the last businesses to re-open, they've been able to look at others for guidance. "Because there are people already going through it, I have the ability to use that and help be as cautious and take as many safety precautions," says Davis.

They have about one week to prepare for their re-opening. Davis says it's somewhat strange because "we don't know what’s actually going to happen. As we try new things, we’ll provide good service and great beer. It’ll just look different." Sherman continues, "for people that are healthy and want to come out with 6-foot distancing and think about what they’re doing, it’s great to us and for our employees that want to get back to work."

Both businesses will be reducing their capacity to 50% and spacing tables six feet apart per Reynold's guidelines and taking extra sanitary precautions.