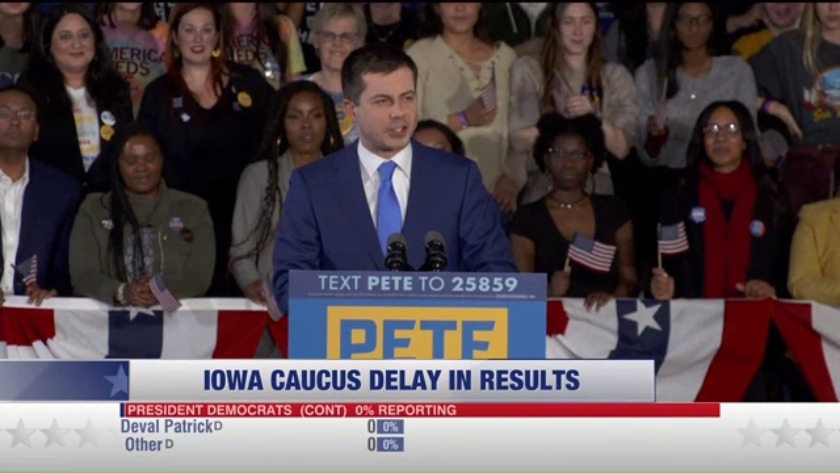 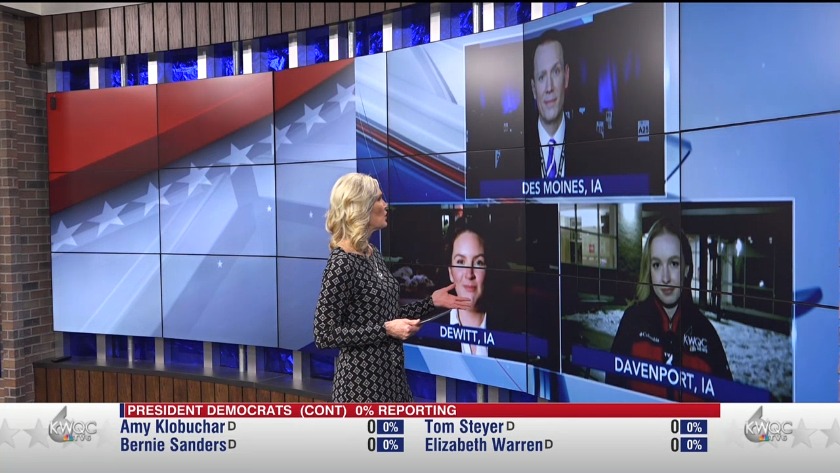 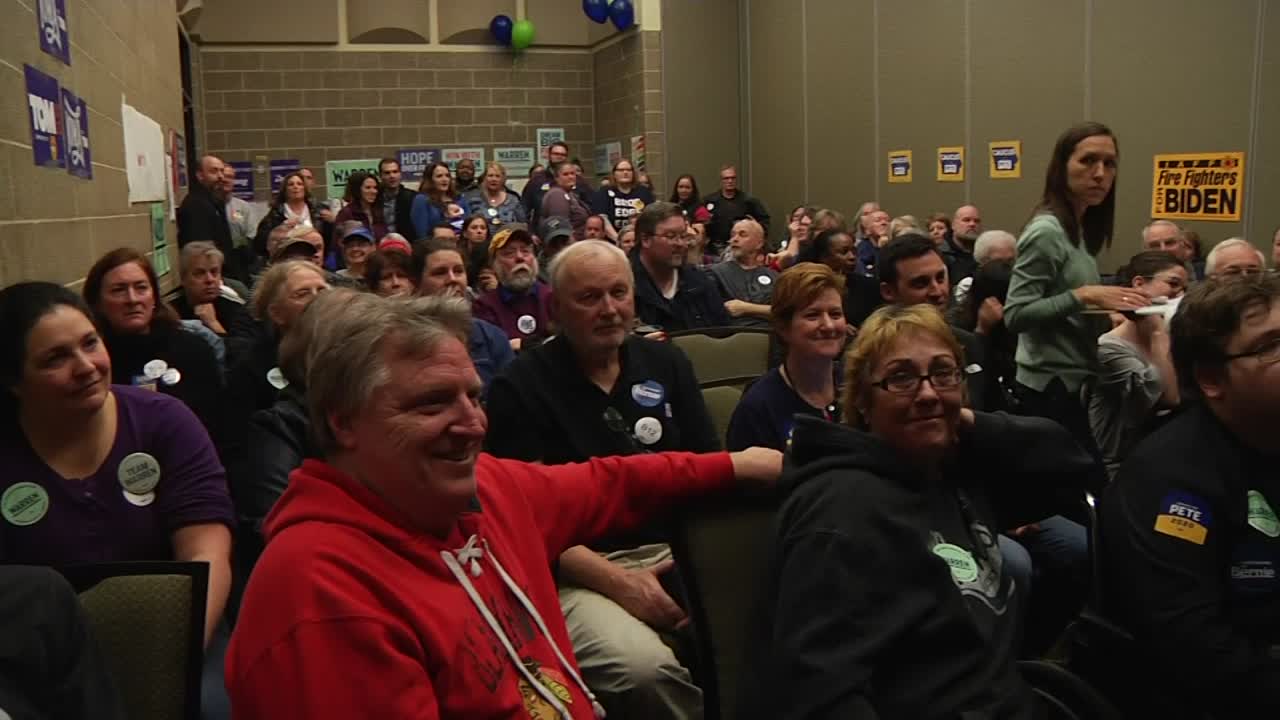 The Iowa caucuses are officially underway. Results for the GOP caucuses are at 100 percent, but Democrats have barely made a dent in their reported results due to "inconsistencies in reporting."

Results for the GOP caucuses came in without a hitch, naming President Trump as the winner, but Democrats had barely made a dent in their reported results due to "inconsistencies in reporting" Monday evening.

As of Wednesday night, 96 percent of precincts were reporting caucus results, with Pete Buttigieg and Sen. Bernie Sanders tied at 26 percent. Elizabeth Warren and Joe Biden round out the top four.

The timeline of the release of the remaining results is still unclear.

TV6's election results are fed in directly by the Associated Press. To see them, click here.

Earlier on Tuesday, Price announced they had told the presidential campaigns that they were "going to release the majority of results that we have by 4 p.m. today."

A “coding issue” with a new mobile app is being blamed for the delay in reporting the results of the caucuses.

The app, built by a company called "Shadow," was supposed to collect and report data quickly from the caucus sites. Technical problems, called a "coding issue" by the Iowa Democratic Party chairman, Troy Price, meant only partial data was being read by the app.

The glitch, which did not affect paper records of the vote, caused confusion and left the caucus results unknown.

The company released a statement saying, "We sincerely regret the delay in the reporting of the results of last night's Iowa caucuses and the uncertainty it caused to candidates, their campaigns and Democratic caucusgoers."

On Tuesday, Price said the coding issue in the reporting had been identified and fixed.

He also defended the handling of the delay in reporting Iowa caucus results.

"In addition to the tech systems being used to tabulate results, we are also using photos of results and a paper trail to validate that all results match and ensure that we have confidence and accuracy in the numbers we report," McClure said. "This is simply a reporting issue, the app did not go down and this is not a hack or an intrusion. The underlying data and paper trail is sound and will simply take time to further report the results."

Who's in the race:

Nearly a dozen Democratic White House contenders are still vying for the chance to take on President Trump in November, who is facing no significant opposition.

People from across the country and around the world converged in Des Moines for the caucuses, from veteran journalists to curious high school students. TV6 had a crew in Des Moines at the Iowa Events Center, where the results of Monday night's caucuses were expected to be announced.

The caucuses are the first nominating contest in the 2020 Democratic presidential primary. They'll give top-performing candidates a boost ahead of next week's New Hampshire primary on Feb. 11.

The Nevada caucus and South Carolina primary will round out the month.

Then, every Tuesday in March, several states will have their own caucuses and primaries.

The Illinois primary is Tuesday, March 17.

What lawmakers are saying:

“Iowans and all Americans should know we have complete confidence that every last vote will be counted and every last voice will be heard," the statement read. “We look forward to Iowa carrying on its bipartisan legacy of service in the presidential nominating process.”

Iowa Secretary of State Paul Pate also released a statement, saying in part, "The Iowa Secretary of State's Office and county auditors have no official role in the Iowa caucuses. They are run by the political parties. Although the caucuses are the kickoff of the presidential nominating process, they are not elections."

How Democratic results are being reported:

Three sets of results will be reported. They are the "first alignment" of caucusgoers, the "final alignment" and the number of "state delegate equivalents" won by each candidate.

The results from each precinct will be sent to state party officials who will certify the numbers and then be displayed for those to see.

The Associated Press will declare the winner of the Iowa caucuses based on the number of state delegate equivalents each candidate receives.

That's because Democrats choose their overall nominee based on delegates.

These are the new forms from Iowa Democrats for caucus-goers, the numbers will be announced by the end of the night #IowaCaucus #IowaDemocrats pic.twitter.com/IvuCqAKhUr

Iowa Democrats released a statement in response to slower-than-expected caucus results a couple hours into the caucuses: “We are doing our quality control checks, making sure the numbers are accurate. People are still caucusing, we're working to report results soon.”

NEW: Iowa Democrats on the slower-than-expected data releases from the caucus results tonight:

“We are doing our quality control checks, making sure the numbers are accurate. People are still caucusing, were working to report results soon.” https://t.co/2F6iuZ4JvY

According to Meet the Press, around 9:30 p.m. during the 2016 Iowa caucuses, 80 percent of the results were in already.

WATCH: At this point in time in during the 2016 Iowa caucuses, 80% of results were in. #Decision2020@kasie: "The Iowa Democratic Party has given zero to anyone, at this point, is incredibly remarkable." pic.twitter.com/iDvTLIeez3

Around 10 p.m., Iowa Democratic Party Communications Director Mandy McClure said in a statement, "The integrity of the results is paramount. We have experienced a delay in the results due to quality checks and the fact that the IDP is reporting out three data sets for the first time. What we know right now is that around 25% of precincts have reported, and early data indicates turnout is on pace for 2016."

Iowa Democrats Communications Director Mandy McClure: "Integrity of the results is paramount. We have experienced a delay in the results due to quality checks ... around 25% of precincts have reported, and early data indicates turnout is on pace for 2016." https://t.co/Bhjenay0xP

To read more on the new process, click here.

At several locations, including the Democratic location at Davenport West, final results are coming in:

Here are final results for Democratic candidates at the West High School caucus location in Davenport:

Our caucus site gets 10 delegates.
Biden and Buttigieg each get 3 delegates, Klobuchar and Sanders each get 2 delegates. #IACaucus #IowaCaucuses

Those under 15% aren’t viable.

Bennet, Bloomberg, Gabbard, Patrick, Steyer, Warren, and Yang are NOT getting delegates at this DeWitt Caucus #IACaucus #IowaCaucus https://t.co/9DaVrVjGn4

Amy, Yang and Biden not viable in precinct 52, Bettendorf. #iacaucus

New this year, the Democratic Party of Iowa has launched satellite caucus locations around the world, including three international, 25 out-of-state, and 69 in Iowa. Two of the locations are in Scott County.

Results for those caucuses were reported on social media:

After realignment, here are your results in the final round of the Drake University Satellite #IowaCaucus.

Warren won DC's satellite #IowaCaucus, which had 100 Iowa voters in attendance. Biden, Buttigieg, and Sanders were all viable.

In Muscatine, Iowa, a satellite caucus for Spanish-speakers was held.

All other candidates zero. #IowaCaucus

As the results came in and some candidates were weeded out, Iowa voters had to choose whether to realign and caucus with another candidate's group for the next round of votes.

Huge round of applause in Dubuque Precinct 9A as @AndrewYang backers move as a group to caucus with @BernieSanders group.@thenation pic.twitter.com/yIDzeQGBWP

A look at who's voting:

Women are the majority of Iowa caucusgoers, according to preliminary entrance polls from FiveThirtyEight:

Women are the majority of Iowa caucusgoers, according to preliminary entrance polls: 58% so far. https://t.co/Da1zCrlnhK pic.twitter.com/qOfAJqGe2K

More than the economy, immigration or foreign policy, Democrats in the nation's opening round of presidential primaries were mostly focused on access to medical treatment and the health of a planet being rapidly warmed by the burning of fossil fuels and other human activities.

Health care leads the list of issues mattering most to Democrats in the #IowaCaucuses, according to early results from the @NBCNews Entrance Poll, with about 4-in-10 naming it as the most important issue in deciding which candidate to support. https://t.co/wRLOho2Svr pic.twitter.com/dVHiy6Mgtd

AP VoteCast is a survey of more than 2,700 voters who said they planned to take part in Monday's Democratic caucuses in Iowa, conducted for The Associated Press by NORC at the University of Chicago.

TV6's live coverage of the caucuses on social media can be seen below:

Tweets of the night:

152 people in this room rallying for Biden, Buttigieg, Klobuchar, Sanders, and Warren.

gonna live tweet this caucus in an elementary school in Des Moines, if you’re curious about the process

Speaker at #IowaCaucus said, “Wow, we have the largest group of caucus goers that I have ever seen.” All for @realDonaldTrump @TeamTrump pic.twitter.com/QW1eQ0qesq

This is Lauren Kundel. This is her first caucus. She came home to Muscatine from the University of Iowa to caucus for Pete Buttigieg. She appreciates his stance on Women’s issues and healthcare. #IACaucus ⁦@IowaPublicRadio⁩ pic.twitter.com/wuhQXtDezO

The ⁦@BernieSanders⁩ corner at the Dubuque Precinct 9A #IowaCaucus is looking young, enthusiastic and confident.

THREAD: for the first time ever, a mosque is hosting a presidential caucus in Iowa.

Former Rep Joe Walsh @WalshFreedom concludes by saying that if people want “4 more years of the @realDonaldTrump show... He is then cut off by the crowd who yell “yes!” and applaud loudly #IACaucus #Elections2020 pic.twitter.com/8pZLpGaSko

The latest from Des Moines via @NYTnickc: Cory Booker, who dropped out of the Democratic primary last month, won a state delegate at one caucus in Iowa https://t.co/qqV2R0c9nY pic.twitter.com/DubIFiedKh

Iowa Democratic Party to release at least 50% of results Tuesday at 4 p.m.

Iowa Democratic Party to release at least 50% of results Tuesday at 4 p.m.