Man charged after shooting at officers with shotgun in Burlington 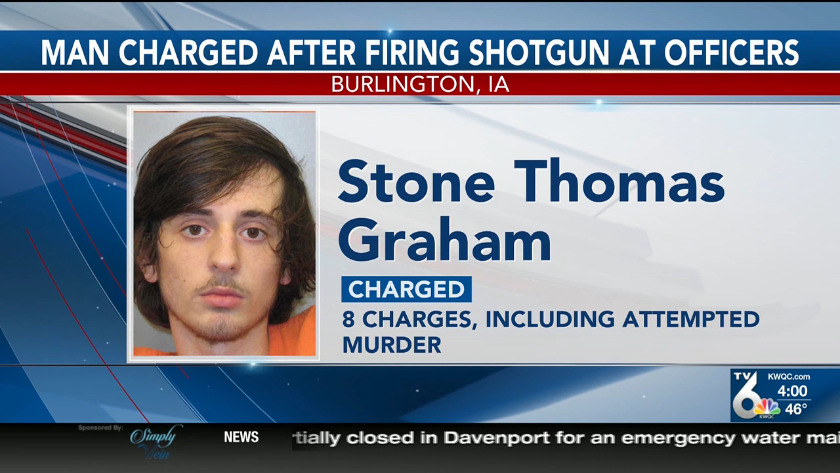 Man charged after shooting at officers with shotgun in Burlington

BURLINGTON, Iowa (KWQC) - UPDATE 11/15: The man who fired a shotgun at officers in Burlington last week has been charged.

He is charged with the following:

Regarding the 1700-block of Amelia Street incident, where police say Graham fired several shots with his shotgun:
- Carrying Weapons
- Going Armed With Intent
- Intimidation With a Dangerous Weapon
- Attempted Murder

Regarding the 1200-block of Plank Street, where police say Graham shot at officers:
- Felony Assault on a Peace Officer
- Attempted Murder of a Peace Officer

UPDATE 11/14: Officials have released the names of those involved in last week's shooting in Burlington.

In an update released Thursday, officials said the Iowa Division of Criminal Investigation has finished its interviews of the officers involved in the Nov. 7 shooting.

Officials say officers were dispatched to the 1100 block of Agency in Burlington following reports of a male who was armed with a shotgun.

The Burlington Police Department and the Des Moines County Sheriff's Office searched the area, and upon arrival, the sheriff and deputies made contact with 18-year-old Stone Thomas Graham, who immediately fired the shotgun at officers.

The deputies returned fire at Graham, who was shot in the leg and continued to run from the scene. Graham was later taken into custody without incident and was transported to a hospital for treatment.

You can read the full press release from the Iowa Department of Public Safety here.

UPDATE: On Thursday, November 7 police responded to a multiple shots fired call around 3:06 p.m in the 1700-block of Amelia Street.

Once police had arrived on scene, they found evidence of gunshots fired from a shotgun, but the suspect had already fled the area. No injuries were reported at that scene.

While that scene was being investigated, police responded to Highway 34 and Central Avenue around 3:55 p.m. for a “personal injury accident.”

The statement goes on to say “witnesses indicated a male fled on foot from the vehicle involved in the accident and was armed with a shotgun. The male was last seen running into the timber out of Highway 34. The Burlington Police Department and Des Moines County Sheriff’s Office began canvassing the area in an attempt to locate the male armed with the shotgun. At approximately 4:09 p.m. Des Moines County Sheriff’s Deputies encountered the male who was still armed with the shotgun. The male exchanged gunfire with the deputies before fleeing back into the wooded area.”

It was a residential area. At 4:44 p.m. police located the suspect and taken into custody at Agency Street.

The male had suffered a gunshot wound to his leg and was transported to a GRMC. No officers were injured.

Just a few hours after that incident, over two dozen community members came together to try to put a stop to the violence through prayer and song at Burlington's Port.

Some families were still concerned, however.

“It’s scary, and I raise my 3 grandkids and it’s not safe for them to be outside. So it’s really about watching your surroundings while you are out because you never know if you’ll get in the crossfire or you could be shot by somebody else out here being violent,” said Cheryl Bowman who organized the prayer vigil.

While that was happening, just a few blocks up the street there was a forum which included Burlington residents and city officials like Burlington Mayer Shane McCampbell, sitting together trying to find a solution to the city’s violence.

The mayor says they’ve already implemented some ideas, like illuminating dark areas through the town and stationing more officers throughout the city.

The name of the suspect and deputies involved have not yet been released.

ORIGINAL The Des Moines County Sheriff's Office is asking the public to avoid the areas of Agency and Plank Streets after a suspect shot at officers.

Officials with the sheriff's office tell TV6 there are no injuries at this point that they're aware of, but the public should avoid the area while units respond.

A viewer said her mother is in the area and she was asked by officers to stay indoors, hide and stay down.

TV6 is working to update this story as more information becomes available.