SENSE OF SAFETY: TV6 Investigates how one school district responded to a near tragedy 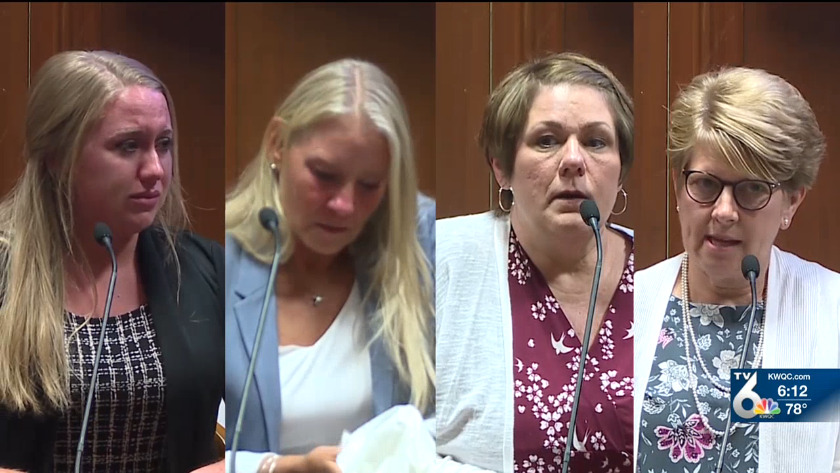 SENSE OF SAFETY: TV6 Investigates how one district responded to a near tragedy

ELDRIDGE, Iowa (KWQC) - Two minutes. That is all it took to change several lives in the North Scott School District Community.

“It went by so quick,” Anna Hodge, a North Scott Student said. “I hope nobody ever, ever has to go through anything like that.

It only took two minutes nearly for a student to pull a gun out inside a North Scott Junior High School classroom, point it as his teachers face and pull the trigger. The safety was on and the gun did not fire.

“At that point, my mind said ‘Oh my Gosh’ he just tried to shoot me and I better not let that happen again,” social studies teacher Dawn Spring said during court, reflecting on the incident.

Students in the North Scott School District return to class on August 23rd. The memory of what happened will be in their minds, but when they get back into the classroom, they will find the district is moving forward and changes have been made. Some of the changes are small, but superintendent Joe Stutting told TV6 weekend anchors Jenna Jackson and Chris Carter the staff at the school kept a horrible situation from becoming any worse.

“You don't think something like that could happen here at North Scott, small-town Iowa where we're made up of a number of just small farm communities,” Stutting said. “Then you know, you then realize you become a national statistic. I'm not sure anything is shocking to the district, you know, you have different emotions over the whole process but our real concern as the district is how do we support our staff and our students and our families.”

After the incident, a group of district leaders spoke to each classroom at the Junior High School. One student had a lasting impact on Stutting.

"I remember one girl in one of the classrooms saying 'can you promise it won't happen again?' and the answer is no,” he reflected. I would be lying to her and I'd be lying to all of you if I said oh this will never happen again because we can't guarantee that and that is something that is hard to tell a 13-year-old, a 14-year-old."

Stutting calls the actions of the Spring heroic, reflecting on how she calmly handled the student, Luke Andrews, when he pulled the gun out talking him down and getting him into the hallway.

“She has always held strong, you know, you always wait for when is the realization going to kick in and she is a very strong individual who has been able to handle the situation, handle the day and has handled it great every day since, including all the way through the trial,” he said.

Since the incident, the district has looked at its policies, how it handled the incident and have found a new path forward.

"We have a phenomenal safety committee that had been meeting since well before the state requirement of safety plans, before this incident, that has met for years, but you learn a lot from that, from any situation,” Stutting said.

One of the most important discoveries was to the “see something, say something” program. During the trial, it was revealed Andrews had mentioned bringing a gun to school to a few students and in emails on his school account. Further, the morning of the incident, he showed the gun in his backpack to a friend on the bus. No one reported it.

"How do we know that all of our students know that the safety of people comes first?’,” Stutting said. “It is not snitching. It is not telling on a friend. It is none of that. Safety always comes first. You must always let somebody know."

To make students feel more comfortable, the district sped up the rollout of the P3 tips system, allowing students to anonymously submit their concerns to the district using a smartphone App. As Stutting reflects, he knows some of the district’s actions could have been better, like instead of calling 911, the school called the School Resource Officer directly.

The district said while they have to reflect on the past, the focus is on the future and helping the entire community move forward.