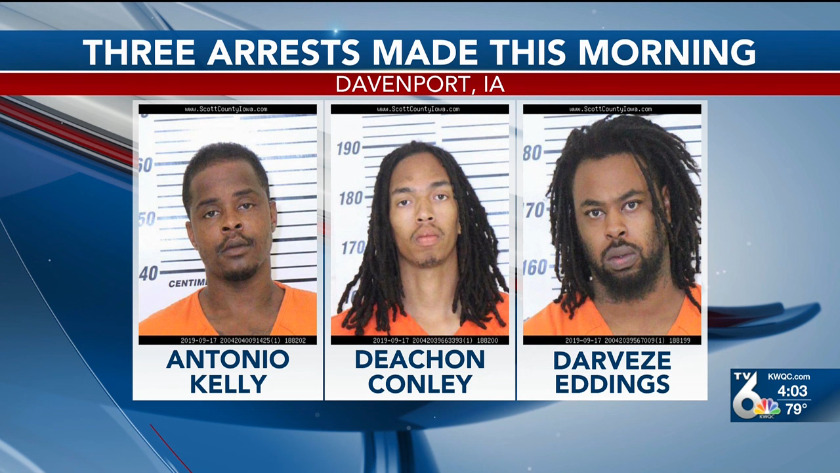 DAVENPORT, Iowa. UPDATE 6:45 am : Police have released the identities of the three people arrested in relation to the overnight shots fired and police pursuit incident.

27-year-old Demarlo Eddings, has been charged with Intrastate warrant for escape, Felon in possession, Intimidation with a weapon, Interference with a weapon.

33- year-old Marcus Kelly has been charged with Felon in possession, Intimidation with a weapon, Interference with a weapon.

24-year-old Teron Conley has been charged with Felon in possession, Intimidation with a weapon, Interference with a weapon.

Police say around 12:30 am on Tuesday, September 17th, 2019 they responded to the 6300 hundred block of Appomattox Road in reference to a several reports of shots fired. Police say they found shell casings in the street and bullet strikes to a vehicle and two buildings in the area.

Police say the suspect vehicle was a Tan SUV, and police located the vehicle at W 53rd and Brady St. When police tried to stop the vehicle when it took off, initiating a police pursuit.

Four people got out of the vehicle and fled on foot. Three people have been arrested. A gun was found lying on the ground outside the vehicle.

No injuries have been reported.

If you know anything regarding this incident, you are asked to call police.

ORIGINAL: A busy night for the Davenport Police Department after shots fired incident lead to a police pursuit.

Around 12:30 AM officers responded to the 6300 blocks of Appomattox Road for shots fired. Once on the scene, those officers spotted several shell casing in the middle of the street and at this point, no injuries have been reported.

Witnesses on scene were able to give a vehicle description and shortly after, another Davenport officer spotted that vehicle near 53rd St. and Brady/53rd and Welcome Way and tried to pull the driver over.

The vehicle then took off, leading a police pursuit up to the I-74, where that car eventually crashed on its own.

At that point, 3 people got out of the vehicle and ran on foot- but that chase didn’t last long. They are all now in custody.

Lieutenant Kevin Smull with Davenport Police tells TV6, "We believe these individuals were involved in this incident. We do believe that again but we have to do our due diligence with the investigation to ascertain further information to confirm that."

Adding, "From my understanding, no injuries have been reported, again we're checking yards, knocking on doors and talking to the neighborhood to make sure there are no victims out there from a gunshot."

Davenport Police believe those individuals were the ones involved but they are in the very beginning stages of this investigation and are working to confirm the information.

They weren’t able to provide us with a vehicle description or any further information but we should be learning more over the next few hours.