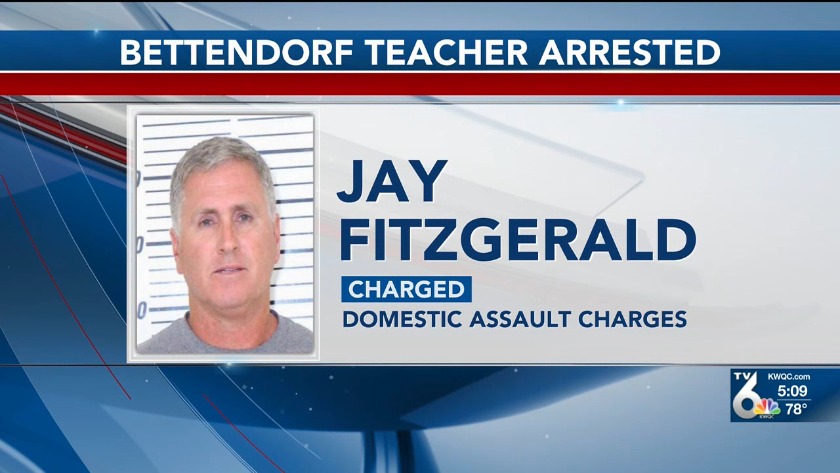 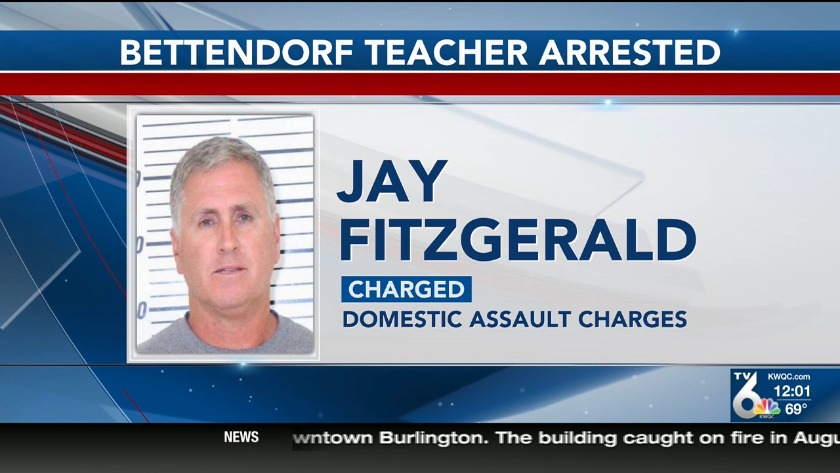 UPDATE 9/6 3:22 p.m. According to the Bettendorf Community School District Director of Communications Celeste Miller, Jay Lee Fitzgerald is still an employee, but is currently on paid administrative leave.

UPDATE 9/5 1:45 p.m.: LeClaire police are releasing more details about the arrest of a teacher at Bettendorf High School.

Police say at approximately 9 p.m. on Sunday, a LeClaire officer responded to the 1500 block of South Cody Road after multiple 911 calls were made referencing a woman in distress trying to get into people's vehicles at a stoplight.

Upon arriving, police saw the woman had visible injuries. Police say she told them she had been assaulted in a vehicle by her husband, Jay Lee Fitzgerald of Bettendorf. After she exited the vehicle, police say Fitzgerald left the area.

Officers were unable to find Fitzgerald that night and issued a warrant for his arrest for Domestic Assault with Injury, a serious misdemeanor.

Bettendorf police took Fitzgerald into custody on the LeClaire warrant on Wednesday afternoon without incident. He was booked into the Scott County Jail without bond.

ORIGINAL: A teacher at Bettendorf High School has been taken into custody on a domestic assault charge.

According to Scott County Jail records, LeClaire police arrested Fitzgerald at 3:45 p.m. on Wednesday. He is charged with Domestic Assault with Injury, which is a misdemeanor.

He's being held in the Scott County Jail without bond.