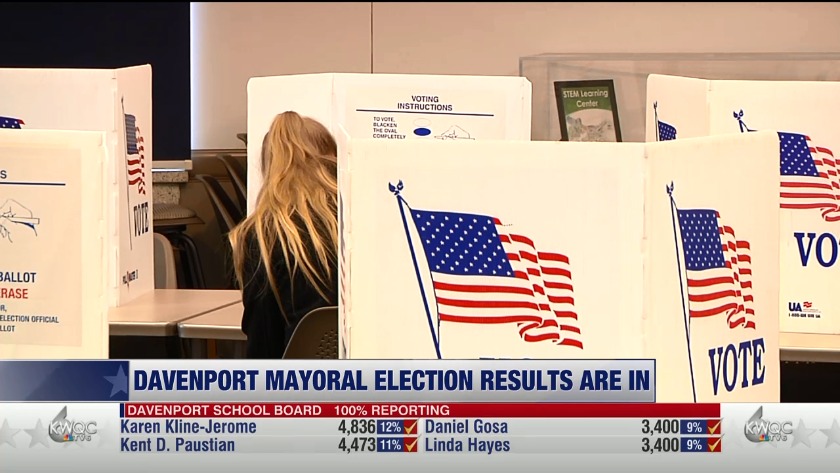 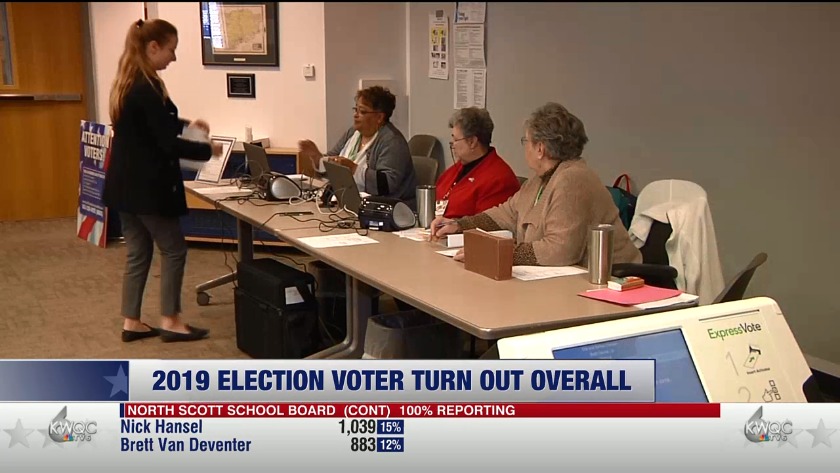 Low turnout for the 2019 Elections

DAVENPORT, Iowa. A number of City Council seats across the QCA and in Davenport will be seeing some new faces at City Hall. The biggest race in Davenport was the highly contested mayoral race and despite the tension, turn out was not quite as high as they anticipated and actually a few thousand shy of the previous election in 2015.

When Mayor Frank Klipsch was elected, over 15,000 turned out to place their vote. Yesterday’s numbers came in at 3,000 less than that. With that much said, it’s worth noting that we didn’t have an incumbent running this year.

When TV6 spoke with Scott County Auditor, Roxanna Moritz, ahead of the election, she was hoping for a 20-25% turnout, which she said is pretty standard for the Municipal. We barely hit 14% in the 2019 Election turnout on November 5th. We saw even lower numbers in the primary, a month earlier, but despite this Mortiz was optimistic for a good turnout, especially with the Mayoral race at the top of the ballot, saying, “With the absentee, I'm hoping that we're going to at least get a 20 percent turnout for the municipal. We have a great mayor’s race going on. You have several of the wards that have races going on. So hopefully in Davenport, you're going to have a really good turnout. Bettendorf, you don't have as many open seats. And in the other rural parts. But most of Scott County is populated by Davenport. The population is in Davenport. So hopefully we'll see a 20 percent turnout."

Regardless of a low turnout, the results are clear, with 100% reporting, Mike Matson is the winner with 7,199 votes over Rita Rawson’s 4,871 votes. More than 12,000 counted and garnering 60% of the votes, Matson will become the next mayor of Davenport early next year.

Matson has a background that has prepared him for this, working as an Alderman on two different wards in the past. Once Mayor Klipsch decided not to run again, Matson says the opportunity presented itself, especially as he and his wife became empty-nesters.

He’s looking forward to representing the people of Davenport and building it to the place that it can be. His priority is public safety and he’s hoping our city will become a stable and welcoming community. He’s planning to work with the council to determine how they will make it happen- but he also wants to hear from you. Matson says, "I'm going to come to you. When you have questions and concerns I want to be the mayor that's out with the people and talking with them. I will listen to you and I'll be a voice for everyone. I will talk to you. I want to be the person that's out there."

Matson will be sworn in as the new Davenport Mayor in early 2020.